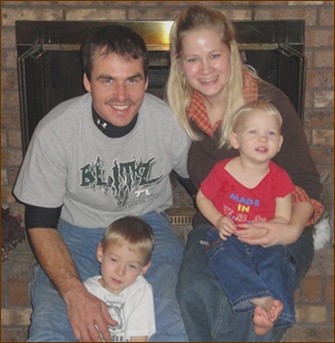 When we first heard that little Dalton passed away, it made little sense and was almost unbearable to accept.

Dalton (front right), two years old, was mischievous and had no fear.  His mother was cooking a wild turkey on the stove, which had been boiling in water for four to five hours and as the family eagerly waited for the turkey to get done, little Dalton was behind his mother at the oven and tried to pull himself up by the oven door handle. When he did that, the whole oven tipped forward and all the hot water poured down over his body. William and Jenica just moved into this fully applianced house less than two months ago and had no idea that the oven was not anchored down and the oven could tip.

So quickly, joy and excitement turned into sorrow and heartache. Fourteen hours after the tragedy and hundreds of prayers from the heart, God chose to take the precious little guy home to Glory Land.

About 900 people came out for the viewing and another 400 attended the funeral.