Who Are the Amish?

The year was 1690, and two men, who were leaders in the Mennonite Church, began to struggle over some religious practices that were taking place in the church. Their names were Hans Reist and Jacob Amman. In 1693, Amman, in a confrontation with Reist's followers, excommunicated Reist and his leaders, causing a shock throughout all of the Mennonite communities in Western Europe. Jacob Amman was causing divisions within the Mennonite church.

After years of banni 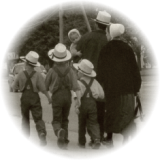 ng and excommunicating nearly half of all Mennonites, some calmer heads began to reason with Jacob Amman. After much soul searching, and considering of the consequences that he had caused within the Mennonite church, Jacob Amman and some of his leaders decided to try to rejoin the mainstream Mennonite church.

In order to show repentance, Jacob Amman excommunicated himself and his leaders. In 1699, and again in 1700, Amman tried to rejoin the Mennonites. The Mennonites felt it was not possible, since there would always be differences and separation by doctrine and interpretation of scripture and traditions.

Some Facts On Jacob Amman

On October 2, 1727, the first Amish people came to America on The Adventurer and settled in Philadelphia PA. Today, they are scattered throughout USA, Canada, and South America. There are more than 373,845 Amish people living in 620 settlements and 2,829 church districts (see charts below).

Pennsylvania has the greatest population of Amish, and Ohio follows right behind in second. On any given day, many hundreds of tourists will go through Holmes County, Ohio, buying Amish hand-crafted wood, quilts, and candies. There are flea markets and auctions as well. Some of the greatest home-cooked meals are served in the Holmes County area restaurants. 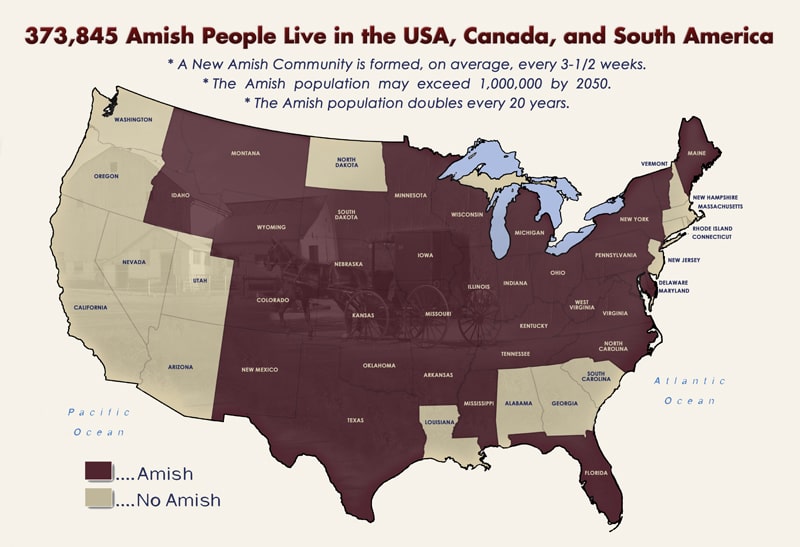 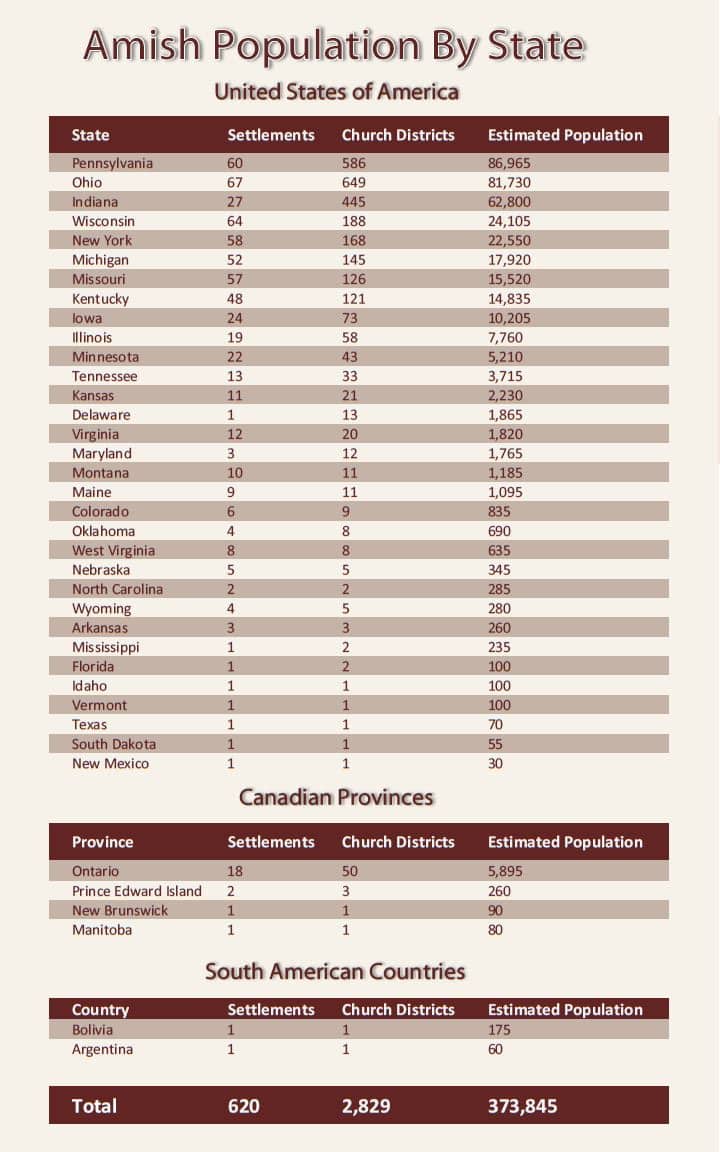 The Amish speak Pennsylvania Dutch at home. They learn to speak, read, and write English by the time they get through the first or second grade. It is tradition, in some Amish communities, to learn German at school on Fridays. This is done so they can read the Bible, prayer books and song books, which are all translated into German.

You might say, there are many different denominations within the Amish culture. For instance, there are Old Order, New Order, Beechy, Tobe, Troyer and Swartzentruber Amish, to name a few. While some denominations are more open minded than others, you will find that in general, they lean very heavily on a list of "do's and don'ts" that have been recorded on paper and passed down through the generations.

The list of rules, called The Ordinance Letter, continues to grow as new issues surface. The Ordinance Letter covers everything from dress, employment, types of equipment, transportation, salaries, entertainment, and the list goes on. In most cases, this letter is over 20 pages long; it is kept by the Bishop of the community. The Ordinance Letter is strongly enforced in each community and is what keeps it together. Anyone who does not abide by the rules, will be disciplined in different degrees, up to excommunication from the church. Excommunication means shunning that person for a period of time and turning him/her over to Satan until there is a repentant spirit.

The Bible, translated into German, is very difficult for the majority to fully understand and is not to be carried outside the home. Other then immediate family, group Bible studies are frowned on and forbidden by the church. Some of the most popular scriptures quoted by preachers in a church service are: Romans 12:1-2, James 2:20 and 1st John 2:15-17.

The children are taught to work at a very early age. By the time they are in the second grade, they are milking cows and working in the fields. The adults stay as far away from politics as possible. They take no part in voting, nor do they have any part in going to war. However, when it comes to paying taxes, the government allows them no slack-they pay as much as any other American citizen. While most of the Amish refuse to own a Social Security number, some go as far as refusing a birth certificate for their children.