Have you Been Baptized? 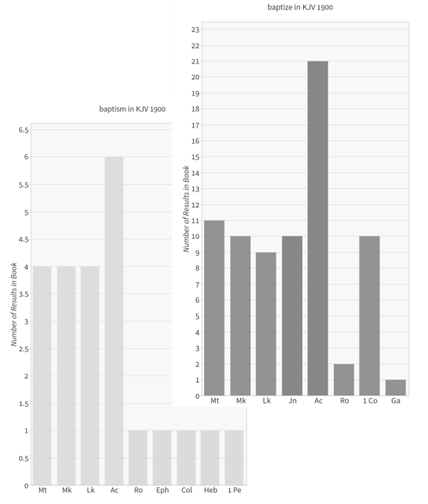 In the New Testament, the word baptism is found 23 times.  The words baptize and baptized are found 74 times. Together, these numbers total 97 times.  The following charts show which books of the Bible that baptism, baptize, and baptized are found in. Notice that much is said about baptism in the book of Acts, which we know as the beginning of the church age – the age in which you and I live in. Notice also, that once we get past the book of Acts and further into the church age … Rom, Eph, Cor, Col, … baptism is not mentioned as often.  Interesting.

Baptism does seem important when we consider that Jesus, right before leaving earth, commanded it.

“Go ye therefore, and teach all nations, baptizing them in the name of the Father, and of the Son, and of the Holy Ghost” (Matthew 28:19).

From the information thus far, how important do you think baptism is to God?

I would guess that your answer is the same as mine. Very important! Why would Jesus command it if it were not important? Why would the authors of the New Testament talk about baptism nearly one hundred times, and not think it was important?

Before we get too much deeper in our study on baptism, let’s consider that water baptism under John the Baptizer’s ministry does not mean the same thing that baptism meant in the book of Acts and following. In fact, it seems clear: those who were baptized under John’s ministry and were still alive after Jesus’ resurrection, got re-baptized. More on rebaptizing in a minute; but first, let’s consider the two different purposes for getting baptized during New Testament times.

The purpose of baptism during John the Baptist’s ministry:

In Matthew 3:11, John the Baptizer mentions the purpose of his baptism: “I indeed baptize you with water unto repentance.” Paul affirms this In Acts 19:4 by saying that John’s baptism was a baptism of repentance and told the people to believe in the one coming after him, that is, in Jesus. John’s baptism of  repentance was a symbolic representation of changing one’s mind and going in a new direction. “And [they] were baptized of him [John] in Jordan, confessing their sins” (Matthew 3:6). Being baptized by John demonstrated a recognition of one’s sin, a desire for spiritual cleansing, and a commitment to follow God’s law, while anticipating the arrival of the Messiah.

The purpose of baptism, beginning in the Book of Acts:

Baptism in the Book of Acts, and following – even to our day in 2022, is viewed as one desiring to associate himself with Jesus’s death, burial, and resurrection. When a believer in the early church, and in our day, chooses to be baptized, he is simply saying: I want the world to know that I identify with Jesus’ death, burial, and resurrection. Consider the following scriptures.

“Know ye not, that so many of us as were baptized into Jesus Christ were baptized into his death? Therefore, we are buried with him by baptism into death: that like as Christ was raised up from the dead by the glory of the Father, even so we also should walk in newness of life” (Rm 6:3–4).

“Buried with him in baptism, wherein also ye are risen with him through the faith of the operation of God, who hath raised him from the dead” (Colossians 2:12).

Before we move too far, let’s look at Acts chapter 19. In this scenario, we are told in the context that about 12 people got baptized the second time: once under John’s ministry and again in Jesus’ name.

“And he [Paul] said unto them, unto what then were ye baptized? And they said, unto John’s baptism. Then said Paul, John verily baptized with the baptism of repentance, saying unto the people, that they should believe on him which should come after him, that is, on Christ Jesus. When they heard this, they were baptized in the name of the Lord Jesus” (Acts 19:3–5).

The gospel books, Matthew, Mark, Luke, and John are considered an extension of the Old Testament. People living in this time period continued to live under the Old Testament law. It is not until Jesus was resurrected from the dead and went back to heaven that the church age began (in the Book of Acts). Today, we are still living in the church age.

Christians have always acknowledged that the church was birthed in Acts 2:1-4. By the time we get to verse 41 of the same chapter, we are told that 3,000 believers in Jesus Christ were baptized the same day. The text does not say, but I suspect that many of these 3,000 people had already been baptized once, under John’s ministry.

“Then they that gladly received his word were baptized: and the same day there were added unto them about three thousand souls” (Acts 2:41).

There is only one good answer. They suddenly realized the importance of identifying with Christ’s death, burial, and resurrection, and did so by immediately being baptized. All 3,000 believers got baptized the same day. Age and status did not matter. These 3,000 souls included businessmen, housewives, church leaders, farmers, dads, moms, grandpas, grandmas, and most likely older children who surrendered their lives to Jesus Christ and immediately desired to be baptized as an outward display of their identification and loyalty to Jesus Christ.

Let’s look at another example in the early church. In Act’s chapter 16, a certain prison keeper suddenly realized that all of his prisoners, including Paul and Silas, had been freed from their chains and prison cell. As the prison keeper was preparing to fall onto his own sword and commit suicide, the apostle Paul cried out, “Do thyself no harm: for we are all here.” Had the prison keeper fallen onto his sword and died, he would have gone straight to hell.  He was not yet born again.

In Acts 16:30, the prison keeper calls out in desperation, “Sirs, what must I do to be saved?” Paul and Silas responded, “Believe on the Lord Jesus Christ, and thou shalt be saved, and thy house” (Acts 16:30-31). Verse 32 says, “They spake unto him the word of the Lord, and to all that were in his house.”

The prison keeper and his entire household (dad, mom, and children) heard the good news of Jesus. That same night they believed and were born again. Wow! What a glorious night that must have been! Acts 16:33 says:

“And he (prison keeper) took them (Paul and Silas) the same hour of the night, and washed their stripes; and was baptized, he and all his (family), straightway.”

When the Ethiopian eunuch (meaning, one who had been castrated) was traveling through the dessert in Acts 8, preacher Phillip suddenly showed up and began to preach Jesus unto him (verse 35). The two men must have also talked about baptism. Verse 36-37 says: “…they came unto a certain water: and the eunuch said, See, here is water; what doth hinder me to be baptized?” Phillip responded: “If thou believest with all thine heart, thou mayest.”

Note: Just like the apostle Paul, Phillip wanted to make sure that the Ethiopian eunuch understood that baptism should only take place after one becomes a believer in Jesus Christ.

“And he [Ethiopian eunuch] answered and said, I believe that Jesus Christ is the Son of God” (Acts 8:37).

Now that the Ethiopian eunuch was a believer, he was ready for baptism.  We are told in Acts 8:38 that preacher Phillip, “Commanded the chariot to stand still: and they went down both into the water, both Philip and the eunuch; and he baptized him.”

Now that we have looked at some baptismal examples, let’s talk about a few other facts.

Who is right?  Is everyone right?

To answer these questions, let’s consider the following facts, taken from scripture. When the apostle Paul wrote his letter to the church of Ephesus, he wrote:

“There is one body, and one Spirit, even as ye are called in one hope of your calling; one Lord, one faith, one baptism, one God and Father of all…” (Eph 4:4–6).

What does Paul mean when he says,  only ‘one baptism?’ Before we twist and complicate the matter, let’s just take it for what it says. The answer:  Not everyone is right! Some are going to die and find out they were taught wrong on baptism.

What then is the one baptism that Paul writes about? The only right way to answer that question correctly and with real confidence is to understand what the word baptism means. Secondly, let us lay all teachings aside and look at examples in scripture. Romans 3:4 says, “…let God be true, but every man a liar…”

Understanding the Root Meaning of Baptize:

Most people know that the New Testament was originally written in Greek.  That was the common language during New Testament times. In the original Greek language, baptize was spelled baptizo. When translators translated the Bible from Greek into English, they dropped the “o” in baptizo and added an “e.” In English, we now read and spell the word baptize. The root meaning of baptizo always means to plunge, fully immerse, fully dipped, put under, covered up.

Paul illustrates the true meaning of baptizo when he associated Jesus’s death and resurrection in his letter to the Romans (Rom 6:3 a & b and Rom 6:4). Paul says that we have been baptized into Jesus’s death in order to rise with Him. Paul uses the same image in Colossians 2:12, saying that we have been “buried with [Jesus] in baptism” and also “raised with Him through faith.”

Questions for each one of us:

Let’s look at some New Testament baptism meaning and mode:

“Know ye not, that so many of us as were baptized into Jesus Christ were baptized into his death? Therefore, we are buried with him by baptism into death: that like as Christ was raised up from the dead by the glory of the Father, even so we also should walk in newness of life. For if we have been planted together in the likeness of his death, we shall be also in the likeness of his resurrection” (Romans 6:3–5).

“Buried with him in baptism, wherein also ye are risen with him through the faith of the operation of God, who hath raised him from the dead” (Colossians 2:12).

“And Jesus, when he was baptized, went up straightway out of the water” (Matthew 3:16).

“And John also was baptizing in Aenon near to Salim, because there was much water there: and they came and were baptized” (John 3:23).

“And he commanded the chariot to stand still: and they went down both into the water, both Philip and the eunuch; and he baptized him. And when they were come up out of the water, the Spirit of the Lord caught away Philip, that the eunuch saw him no more: and he went on his way rejoicing” (Acts 8:38–39).

Let’s conclude with some important statements:

“Then Philip opened his mouth, and began at the same scripture, and preached unto him Jesus. And as they went on their way, they came unto a certain water: and the eunuch said, See, here is water; what doth hinder me to be baptized? And Philip said, if thou believest with all thine heart, thou mayest. And he answered and said, I believe that Jesus Christ is the Son of God. And he commanded the chariot to stand still: and they went down both into the water, both Philip and the eunuch; and he baptized him. And when they were come up out of the water, the Spirit of the Lord caught away Philip, that the eunuch saw him no more: and he went on his way rejoicing” (Acts 8:35–39).