The Power of the Tongue

It has been said, women talk more than men.   That, of course, is not the case at my house.  I’m the talker.  Esther is the listener.

According to BBC and their research, women use an average of 20,000 words a day, compared to the mere 7,000 that men utter.  If their research holds water, women speak nearly three times more than men.  Not that it matters at all, I just found this interesting as I began the following study.

In chapter 3 of James, starting in verse 5, we can read:

Those are some pretty strong words, wouldn’t you say!? 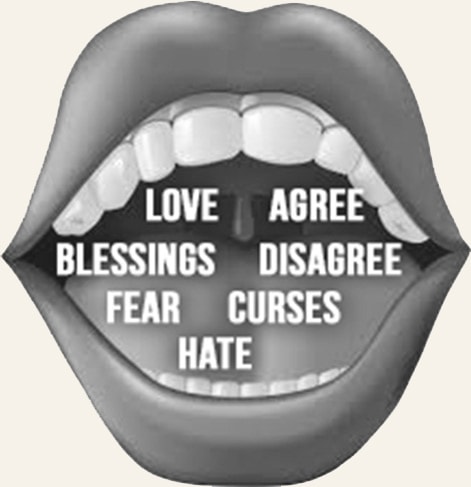 Solomon writes in Prov 18... “Death and life are in the power of the tongue.”

If Solomon is right, and I believe he is, you and I have the ability and power to speak death into situations and other people.  We also have the ability to speak life into them.  That is some powerful stuff, my friend!  Mind boggling!

What if, when we die, we find out that many of our positive and negative experiences in life were directly connected to, and the result of words that we spoke out loud?

Please don't read into this too much, but I've been thinking:

It appears, after creation and reproduction began, God sat back and rested.  That was at least 6,000 years ago and Hebrews says He is still resting.  (See Hebrews 4:10.)

Far too many people, who don’t realize the power of their own words, are talking themselves to death. They speak forth whatever negative thing they feel or have been told, and don’t realize that they are signing their own death warrants.

Lastly, words are weapons, and we have to condemn the negative words spoken against us.

“No weapon that is formed against thee shall prosper; and every tongue that shall rise against thee in judgment thou shalt condemn…” (Isaiah 54:17).

From experience, I’ve learned that when someone speaks negative words over me or around me, if I counter them right then, they lose their power. But if I wait until later, possibly because I don’t want to offend, then it takes time to get those words out of my mind. They start germinating nearly instantly. Therefore, I try my best to condemn negative words when I hear them. We have to do this. The Lord doesn’t do this for us.

In conclusion, let us both consider David’s prayer, when he said: “Set a watch, O LORD, before my mouth; keep the door of my lips” (Psalm 141:3).