Does God Care if I Vote?

As you know from previous issues of the Amish Voice, we believe it is our duty to get involved in the voting process of our government officials.

Like many of you, we were taught as children to stay away from government handouts and to separate from politics as much as possible.  With that, we kept ourselves separated to a large extent.  We made our own list of laws and rules to follow, and when our laws clashed with the English laws, we seldom lost.

In May of 1972, the Amish in Wisconsin went all the way to the Supreme Court to fight for educational rights.  This Amish group refused to let the laws of the land control them or their children’s level of education.  How one feels about the winning outcome is not my point, but what I would like to point out is that the Amish stood up, and they won.  They were able to accomplish this because thousands of Amish and non-Amish fought and benefitted.  Not only did the victory allow Amish to continue teaching their own children, it gave others more liberty to home school as well.

There have been many other times throughout history that Amish stood up and fought for their rights.  For instance, when I was growing up, the law tried to force my community to put orange triangles on our buggies; we fought the law and won.  Others have fought over building permits or vaccinations and have also won.

The truth is our Anabaptist forefathers have always been fighters.  Many were hated, separated from their families, lived in fear, and even killed for taking stands.  The government-run church was determined to win and refused to back off, which went on for more than just one generation.  But guess who won?  The Anabaptists! The fighters for religious freedom.  And, once again, more than just the Amish have benefited from these victories.

Now, let’s fast forward to the year 2020.  Here we all are living in a world that is becoming so evil that it reminds us of the days of Noah and the flood.  Wickedness abounds.  Homosexuality, murdering millions of innocent and living babies in the womb, and mass shootings are becoming common occurrences.  The list of pure evil in our country only gets longer and more intense with the passing of years.  Many of us are concerned about the future of our precious children and grandchildren.

Can you and I stop the chaos and power-hungry government from taking over? Is there anything we can do to protect our religious freedom and children?

Most say yes, but then come the multitudes of opinions on how to do it.  Some say to put everything in God’s hands.  Others say that we must speak up and fight for our freedom!  And then there’s the group that says it’s all going to come to an end anyway, so why not just let it run its course and be done!  I’ll tell you, I’m sure glad our forefathers didn’t follow that line of thinking.

I sincerely believe that from the very beginning, God commanded us to get involved in the world we live in.  Let’s take a look.

In Genesis 1:28, God commanded the very first couple to “Be fruitful, and multiply, and replenish the earth, and subdue it: and have dominion over the fish of the sea, and over the fowl of the air, and over every living thing that moveth upon the earth.”

We know what fruitful, multiply, and replenish mean, but what do the phrases “subdue it” and “have dominion” mean?

¨ “Subdue” means tread down, conquer, and bring into subjection. — Further study defines the root of subdue as meaning footstool.

¨ “Have dominion” means prevail against, reign, and rule.

This verse was not a suggestion, but rather a command, straight from the mouth of our Creator.  If it (whatever it may be) lives and moves on the earth, it is our duty to subdue it and have dominion over it.  From this, and many other scriptures, we have learned the value and need for various levels of authority in the family, church, and our government.

God was also very clear in Deuteronomy 12:2-3, when He said to His people, the Jews: “Ye shall utterly destroy all the places, wherein the nations which ye shall possess served their gods, upon the high mountains, and upon the hills, and under every green tree: And ye shall overthrow their altars, and break their pillars, and burn their groves with fire; and ye shall hew down the graven images of their gods, and destroy the names of them out of that place.”

Let’s move on to the prophet Jeremiah and God’s clear command to the young boy, who is still in his teenage years:

In Jeremiah 1:10, God tells the prophet, “See, I have this day set thee over the nations and over the kingdoms, to root out, and to pull down, and to destroy, and to throw down, to build, and to plant.”

At first, I felt like the negative things this verse commands were not for me. I would much rather just build and plant. But I’ve come to realize that before I can build and plant, I need to root out, pull down, and destroy.

If the Lord is the same “yesterday, today and forever” (Hebrews 13:8), and if He changes not (Malachi 3:6), then why would we not at least consider these commands among many others in Scripture with the exact same message? 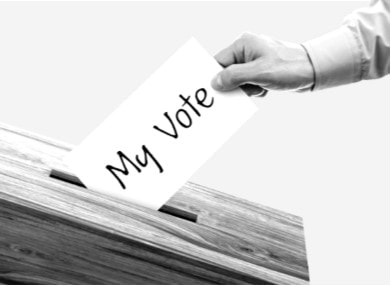 Now that we have a better understanding of God and His clear commands, let’s ask the question again:  Should I get involved in voting?  Does God care?

I say yes, we must get involved.  It is our duty and obedience to God’s command!  In fact, if our parents and grandparents would have taken a more serious stand and gotten involved, our government may be in a different shape than it is in today.  You and I should not expect an ungodly government leader to make Godly decisions and lead us in a Godly direction.  Godly decisions and directions take place when we have Godly leaders in office.

Let me tell you a true story that happened in my life:

About ten years ago, many believers in my county got together and decided to claim the lands of Ashland for God.  Men, women and families began to meet on a regular basis to pray.  Preachers and lay people traveled around to every single highway and byway that lead into Ashland County and prayed. They prayed that God would not allow evil to enter our county.

Not only did God’s people pray fervently, but each one began to encourage the Godly believers in our county to run for leadership positions.  One by one, God’s people voted for Godly leaders, and one by one, God gave us the desires of our heart.

Today, it is not uncommon for our city mayor and others to stand up in public and declare their love for and devotion to the Scriptures.  Many in office have clear testimonies of surrendering their lives to Jesus Christ; they are not ashamed to share the truth of God in public.

This did not happen overnight.  It took prayer, and it required meetings, planning, stepping up to the plate, and yes, voting.

It does not end there.  You see, before we had Godly leaders in position, some of the businesses in our county were closing their doors.  Thousands of people were losing jobs; families were hurting and losing homes; and downtown stores looked more ghostly then alive.  But then something wonderful happened.  God’s people started taking dominion over the county and city of Ashland; they began to pull down, destroy, and throw down.

After that, the building and planting began.  Big CEO’s came riding into the city of Ashland, looking to build a laundry factory.  Our Mayor, Matt Miller, made it clear: before we make any decisions in this city, we seek direction from the Living God of the universe.  They bowed their heads and prayed with those big-money wigs.  Before long, the new laundry business was going up, and folks in the community were buying old ghostly-looking store fronts downtown and turning them into beautiful and prosperous businesses.

Who do you want ruling over you?  Your children? Your grandchildren?

I already know your answer because I believe it’s the same as mine.  We want Godly leaders in our counties, cities, state, and country.

Will you join me by registering to vote in 2020?  Will you cast a vote for whom you believe will lead our Country in the right direction?  I hope so.  I really do hope so.  If for no other reason, let’s do it for the sake of our children and grandchildren.  Let’s do it for the sake of the innocent babies, who are being murdered daily.  Let’s do it as unto obedience to our Living and Righteous God.  We are His feet, His hands and His voice in the world today!

Matthew 5:13-15: “Ye are the salt of the earth: but if the salt have lost his savour, wherewith shall it be salted? it is thenceforth good for nothing, but to be cast out, and to be trodden under foot of men. 14 Ye are the light of the world. A city that is set on an hill cannot be hid. 15 Neither do men light a candle, and put it under a bushel, but on a candlestick; and it giveth light unto all that are in the house.”