Head Covering: Should I Wear One?

I am former German Baptist and while there is a vast difference between them and the Amish, I am still having some struggles with what I see is a mild form of shunning. My biggest question right now is about head covering. Should I? Shouldn't I? Is it a command? Does it matter? If you could help me gain clarity on this issue I would greatly appreciate it. It is the main area of contention between me and them and I really have no answer. At this time I am not covering. Thank you so much for your ministry.

Thank you for contacting the ministry. I have on several occasions run into German Baptists. More recently at an airport where I had the opportunity to pray with a young man who was dealing with some heavy salvation issues. I had hoped that he would call me sometime, but haven't heard any more from him.

As for your question on the head covering, here is how I view and understand the scripture in 1 Corinthians 11:1-16:

With that in mind, let's look at the verses following this statement. 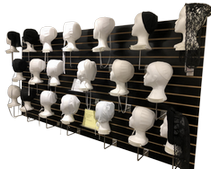 Why was this necessary? It would help us to understand the culture, since it (head covering) had everything to do with the culture itself.

Here is some detailed background:

In the Corinthian culture, women wore coverings to differentiate themselves from the prostitutes whose heads were shaved as a sign of their service to Aphrodite. Thus, a woman who exercised her liberty in Christ by praying or prophesying with her head uncovered caused confusion in the congregation and dishonor to her head (husband).

How do we know prostitutes caused this head covering debate and contention in the church? Because during that time period, prostitutes shaved their heads and, like any other culture, they were looked down on by those who became Christ followers. (in reference to verse 6)

Because of the conclusion of the head covering matter in verse 16, it is clear that the head covering was a custom of the day. Paul writes: But if any man seem to be contentious, we have no such custom, neither the churches of God. Remember, customs change from one culture to the next. Secondly, customs change from generation to generation. Sadly, the Corinthian church was arguing and quarreling among themselves, just like the church so often does today.

There is one last point I would like to make about the head covering. Few, if any, ever think about the fact that when the Bible describes the Corinthian type head covering, it is referring to a veiling that covered the entire head from the shoulder up. Not a small flat hair doily like some churches wear today. Nor a fancy hair covering that changes in size and style, depending on the group's requirement. So, if someone from the Plain culture desires to quarrel, be contentious or argue with you about not wearing a head covering, you should remind them that they are not wearing one either.