What Separates Christianity From All Other Religions?

Let’s start with some questions, before we dig into What Separates Christianity From All Other Religions.

First question.  If I sat across the table from you, and asked, do you—with great confidence—know what you believe about Christianity?  What would you use to back up your answers?

How do your beliefs differ from 4,200 other religions in the world?

How do you know you have the right belief(s)?

Would you change your beliefs, if you knew they were wrong?

I believe these questions are all very important—not only for our own sake, but for the sake of others?  If you have a family or are planning to someday have a family and raise them on your beliefs, you will, at some point, be faced with each one of the questions we just read.

God’s Word says… be ready always to give an answer to every man that asketh you a reason of the hope that is in you…1 Peter 3:15

Sooner or later, you and I will give account for what we believe—if not on this side of the grave, surely on the other.

Then opened He their understanding, that they might understand the scriptures. Luke 24:45

The great tragedy is that most professing believers do not know what they believe, simply because they do not read the Scriptures.

For these reasons, I would like to take a few minutes and remind each one of us what separates Christianity from all other religions.  I believe there are at least three major differences. 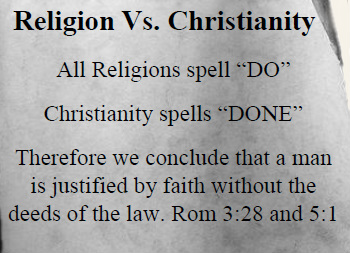 1) Christianity is not a religion; it’s a relationship.

2) Christianity is based, not on what you can do for God, but rather, what God did for you.

The word picture for RELIGION is man-attempting to reach God on his own.  A RELIGIOUS man places his own rules and traditions above God’s commandments; he believes that somehow his list of do’s and don’ts will please God enough to make him acceptable.  Jesus had a few words to say about that approach:

Most of the 4,200 religions in our world today are made up of people working hard to reach God on their own.

CHRISTIANITY, on the other hand, is exactly opposite—it is not what I do for God, but rather, what God has already done for me.

For by grace are ye saved through faith; and that not of yourselves: it is the gift of God: Not of works, lest any man should boast. For we are His workmanship...Ephesians 2:8-10

3) Christianity is the only belief system where the religious leader not only died, but rose again.

Every single founder whom I mentioned has died. And all are still dead, except one—Jesus Christ.  My friend, the founder of Christianity is alive and sits at the right hand of the Father in heaven (Mark 16:19, John 21:14).