Finishing the Course - Keeping the Faith

The first time I met Dan Byler, I knew right away he and I would be friends for life. He was a man on fire for God who burned with a passion to reach the world for Christ. You see, he understood all too well what it was like to be lost and searching for true meaning in life. And he never forgot what it felt like when Jesus reached down from heaven, loved him unconditionally, forgave him of his sins and freely gave him everlasting life.

On numerous occasions, Dan would call and talk for hours if I let him. Once, he came to our house and shared his testimony with a bunch of youth. He not only shared about his troubled life as an alcoholic, but also about the time he was asked to take the community water tower down.

Before beginning the task, he sat down in his rocking chair one evening and figured out exactly how he was going to do it. Soon thereafter, he got a cutting torch, crawled all the way to the top of the tower and, piece by piece, brought the tower down. People were overly impressed by his way of dismantling the tower, and soon pictures and stories started appearing in newspapers everywhere.

Dan also had a business mind. He owned a campground, a train, a small zoo of exotic animals, and an upholstering business. House churches and campers from all over the United Sates came to see him.

In late 2008, Dan called me one day and said, "Joe, the doctors say I have cancer." Then he went on to say, "But don't you worry a bit; God will not let me die." In fact, he was totally convinced that he didn't even have cancer. But as time went on, it became quite clear that his body was slowly dying away.

One day in early 2009, Dan called me to say goodbye. He had finally given up and was preparing to die. That day, we both wept on the phone. I had never seen or heard Dan give up on anything. Never! It was not like him. But now he was surrendering and making preparations to die and go be with Jesus.

At the end of our phone conversation, I said, "Dan, I want you to hang on to life long enough for me to come and see you." He promised he would. Several days later, I headed for Jackson, OH to see Dan Byler, the man who had impacted my life like few others. 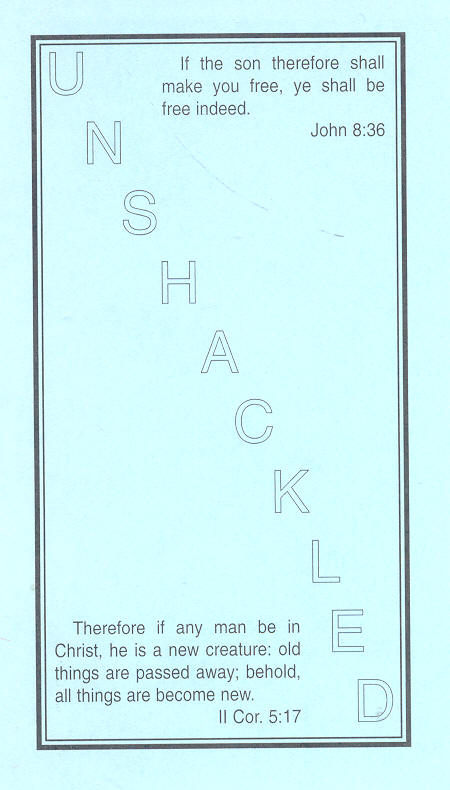 When I got to Dan's house, he was barely able to raise his head off the pillow. But even then, he was filled with excitement and could hardly wait to see Jesus. As we talked, I asked him if it would be ok if I continued printing and handing out his life story-Unshackled.

"Oh," he said, "that would be absolutely awesome."

As Dan and I continued talking, he said, "Joe, I am not sure why, but there has always been four empty pages at the end of my gospel booklet. Do you have an idea what we can put there?"

It was as if the Lord just gave me the answer. "Dan," I said, "you need to let the people of this world know that you finished well. You fought the battle of life and refused to give in to Satan. You clung to God and you raised your family in a Christ honoring church."

"Ah yes," he said, "I walked with my Lord and did not give up, even though many of my friends and relatives from back home spread rumors about me and my family."

"Well," I said, "Dan, the truth is, you finished well! You never left the faith and your readers need to know that."

When I said that, the tears just started running down Dan's feeble cheeks. Finally, he looked up and said, "Joe, that's it; I must tell the readers that I kept my eyes on the finish line all the way to the end. Please fill the last four pages in with the fact that I finished well."

Finally, it was time for me to leave and go home, knowing that I would never again talk with my friend on this side of heaven. We hugged, said our goodbyes and I left.

Exactly two weeks later on July 31, 2009, my phone rang, and it was Dan's daughter. She said, "Joe, dad passed into eternity last night." She went on to explain how dad had awoke up from his coma, just long enough to tell the family that two angels were at his bed side to take him home. Soon after that, Dan Byler drew his last breath and went to be with the Lord forever more.

Since then, my thoughts went to II Timothy 4:7-8 where Paul writes,

I have fought a good fight, I have finished my course, I have kept the faith: Henceforth there is laid up for me a crown of righteousness, which the Lord, the righteous judge, shall give me at that day: and not to me only, but unto all them also that love his appearing.

My friend, if you do not know for sure that your sins are forgiven, can I urge you to repent and let Jesus save you from your sins and the lake of fire? You cannot do it on your own. Please don't wait one more minute.

In Romans 10:9, God says: That if thou shalt confess with thy mouth the Lord Jesus, and shalt believe in thine heart that God hath raised him from the dead, thou shalt be saved.

The Bible goes on to say in verses 12 and 13 of the same chapter: For there is no difference between the Jew and the Greek: for the same Lord over all is rich unto all that call upon him. For whosoever (your name) shall call upon the name of the Lord shall be saved.

Here is a model prayer that you can use to call out to God:

Today, I call upon the name of the Lord for my salvation. I believe in my heart that God the Father raised Jesus from the dead in order that I might have eternal life. I now declare Him to be the Lord of my life. I renounce any effort on my part to save myself. I stand with God's Word and believe that I have been transferred out of the kingdom of darkness and into the Kingdom of His beloved Son. In Jesus' name I pray and believe. Amen