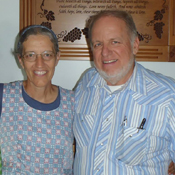 For some time now, I have wanted to share my history and the testimony of how I found Jesus.

I grew up in an Old Order home, which is one of the more strict and legalistic Amish groups. Although I was born in the state of Ohio, I spent most of my years growing up in the state of Pennsylvania.

I had a loving mother, who prayed for her family daily. My father, on the other hand, was a workaholic. There was very little spiritual teaching in my home, although we did go to church every other Sunday, which is typical of Amish everywhere. I heard sermons that were mostly in High German, a language I understood very little of.

God felt very distant to me; I viewed him as a God with a big stick ready to pour out his wrath for any infraction. Unfortunately, I feared God in the wrong way. I feared that he would send me to hell for not being a good person. In my perspective, a loving God was simply not in the picture.

The Amish church I was a part of had pages of rules to keep; these rules were given to keep us separated from “the world.” The term “world” basically meant anyone not Amish; it was the lifestyle that the rest of the world kept. We were always warned to be separate and not conformed to it.

After growing up, getting married, and having my first children, I began to wonder about life. Who was God? Did God only care about the Amish? Could a person get to heaven if they weren’t Amish? I had so many wrong concepts of God.

Then, the day came that I heard the gospel message. A man who hauled Amish for a living became born again, and he shared the gospel with everyone who would listen. Many did not want to hear what he had to say. In our community, his faith was labeled a fremda glauva, or strange belief.

I, on the other hand, was open and gladly heard his testimony. After listening to his story, I knew that I had never had an experience like he did. At first, I excused it by telling myself that Amish don’t need to have a born again experience, but God, in his mercy, kept drawing me to Himself. Praise God, eventually, my head knowledge transformed into a heart experience!

At the same time that God was working in my heart, other young couples in my Amish community were also becoming born again, largely through the influence of the same man whose testimony was convicting me. All at once, there were around six couples in the church who had been born again. This change made the bishop of our church unhappy. He had a fear of the fremda glauva and tried his best to wipe it out. His resistance only served to fan the flames of revival.

This change in my personal life started a journey for my family. First, we moved to another state and began attending a New Order Church. At our new church, we heard sermons that promoted the new birth. Unfortunately, though, they still had a lot of legalism mixed in, which clouded the salvation message.

After some years at the New Order Church, my family and I moved back to Pennsylvania and began attending a conservative Mennonite Church. Though all of these changes, God seemed to always be nudging me. We attended several different church groups, but there still seemed to be a void; sometime was still missing. It wasn’t until I was willing to completely embrace Jesus, and openly declare myself to be a disciple of his, that I finally felt fulfilled.

Hallelujah, I have found him whom my soul so long has craved. Jesus satisfied my longings. Through his blood I now am saved!

We would like to encourage you to leave a message for John below.  When you do, it will notify John and be an encouragement to him.  God bless you!