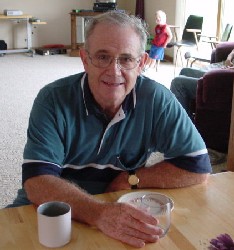 I am a former Amish from Ohio.

Growing up it seemed life was simple; everything was black and white. Surrounded by others of various beliefs, we just knew we were the ones who got it right. Others were out to mislead us, and we needed to resist. It seemed that isolating ourselves would hush those others who taught things that threatened our "Amishness."

I was born in 1938 and raised in Holmes County, Ohio. I went to school at Buena Vista school, which was closed in 1957. My father decided to move to Canada at that time as some of our people, the Troyer Amish branch, had already begun a settlement in Ontario. There are several different types of Amish around Ontario. In Amish there are degrees of "Amishness," and we would have been near the lowest with Swartzrntruber Amish at the bottom.

My Grandfather was JJ, brother to DJ. DJ led my grandfather to the Lord in his senior years. This caused quite a stir and grandfather, the bishop of the Stutzman church, was apparently "silenced" by others. A younger bishop who seemed to have more influence. Grandfather would take the opportunity to teach bible stories to groups of grandchildren on Sunday afternoons. He also was known to support Missionaries, and some tried to stop him from doing this. This bit of information is not known among the local Amish people. I have been made aware by three different sources that this is fact. Nevertheless, he continued his support and I believe I am quite possibly the result of his prayers.

When I was about 8-9 years old, I loved to read. We had a little bible story book called "First Steps for Little Feet" that told about the parallel of Moses raising the serpent on the brass pole and the people receiving healing for the fatal serpent bite. The book talked about believing on Jesus dying on the cross and receiving salvation by faith. It was so simple, and I believed with all my heart and found the burden lifted. I felt like I could fly, I had so much joy! But years of Amish training quenched this, and Dad told me on several occasions that all we could do is hope.

But God had begun a work. I had a spiritual hunger that needed to be fed, and I felt empty. I joined the church at the urging of my mother and my cousin Levi. This turned out to be a bad move, although maybe necessary in order to get me going. I was not rebellious in terms of violating the ordnung. I had expressed concern during instruction time about the practice of bundling. This led them to delay baptizing me.

Meanwhile, in the winter of 1960, an event occurred one night that tested me. A local farmer had hired me to help milk cows. The family attended the Baptist church and were curious of what Amish people believed.  I soon realized what I had learned many years ago made a lot of sense, and where we spent eternity was far more important that what church rules were, such as what was allowed or forbidden. The key question I kept asking myself was, "will keeping all the rules result in salvation?"

Meanwhile, an event occurred that forced the question.

A couple of young Amish boys who were of rumspringa age were visiting me late one evening, and they wished to take a joyride. With a car of course. Take the car, and nobody will know.  We’ll just take a short ride and bring it back. So, being the keys were hanging right there by the door, it was quite attractive. So away we went. But about 3 miles away the car wound up in a ditch in deep snow. Now what? Well it took most of the night to get things things back to where they belonged.

However, the damage to vehicles was slight, but the damage to relationships was more severe. I had never heard of or been asked to apologize. Thee family was quite gracious when I needed it most, and I am still impressed. But here I learned a valuable lesson. Trust is a foundation of relationships. Apologies helps repair them. A damaged relationship should be more imperative to repair than a damaged car or other such items.

I was convinced some Amish people were after me to teach me a lesson. I also had so much fear in me that I had verbal paralysis when confronted by those in authority. I would turn white as a sheet when a buggy came by as I worked on a non-Amish dairy farm right in the midst of our community. I was determined to beat this thing, which sometimes choked me and rendered me speechless.

The farmer was a Baptist and they invited me along to church, which I did from day one. I heard the salvation message, but I was so severely "brainwashed" that I hesitated to make a commitment. When I eventually did, nothing seemed to happen, until the Lord brought to mind my childhood experience. I began to build on that and never looked back. I found that I loved the people who loved Jesus and talked openly and freely about him. This was unheard of in our community.  I then knew God had indeed revealed Himself in a way that I could not make up. My heart yearns for my brothers and sisters to come to the Lord. There is nothing a man can experience in this life greater than the experience of knowing Jesus. He is Lord! You CAN trust Him! He is the Truth, the Life, the Way. He does not lie when he says He will forgive repentant sinners! But you know that already.

I married at the age of 38 to a lady whom I met at a Bible study. The Lord led us to each other, and when we discovered this, I said let's not wait, might as well get married. So we got engaged and surprised even our closest friends. That was in 1976. We have three children, two boys and one girl along with six grandchildren.  We are currently members of Aylmer Evangelical Missionary Church.

We have a Christian Camp known as Barnabas Camp at the back of our property. We, along with another couple have run six programs for various age groups during each summer. As  we age, we seek guidance as to the future of this ministry.

God bless you as you give guidance to those whom He sends your way.

We would like to encourage you to leave a message for Eli below.  When you do, it will notify Eli and be an encouragement to him.  God bless you!