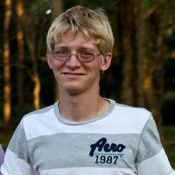 From the time I was a young Amish boy, I thought that I wouldn't mind being a preacher. In my early teens, I memorized large portions of scripture in German, and practiced quoting them as I heard them in church, imitating my favorite preachers. As I grew older, the desire to do something for God grew stronger. I wanted to rise above the ordinary, dull life I seemed to be destined for.

I devoured missionary books. I was drawn to the adventures of people who placed their lives in danger to bring the gospel to those who had never heard. I read with eagerness the magazines from Voice of the Martyrs that came in the mail. I was amazed at what was happening during my generation in other parts of the world. The stories of people becoming converted, and following Jesus Christ in spite of intense persecution, made me realize that the story of Jesus Christ did not end with the Bible. God was active in my lifetime, and I wanted to be part of it.

After my family left the Amish, I went on my first mission trip to Haiti. I fell in love with missions immediately. A highlight of that trip, and similar ones following, was hiking into remote mountain villages, and spending time with the people for days at a time. I preached my first message through an interpreter in an open air service. Within the next four years, I returned to Haiti four times. During two of those trips, I spoke at a pastors' seminar in the mountains. On my last stay there, I was overwhelmed with the need in the world for people to be evangelized and discipled, and I committed my life to missions.

So began a serious search for God's will for my life. I explored different opportunities, and went on several short term trips, including China and Ukraine. I learned a lot, but I longed to have a long term plan for my life, and a place of my own to serve as a missionary.

When I was twenty-one, I was exposed to the world of Bible Translation. I learned of thousands of people groups left in the world who have no bible in their language. In 2015, I enrolled in a nine-month course at Baptist Bible Translators Institute in Bowie, Texas. There, I met a wonderful young lady, with the same vision for missions as my own. I graduated in May, 2016, and we are planning to get married this September.

We are still praying for clear direction, but we have set our sights for ministry among tribal groups in the Amazon rainforest of South America, which is home to about one half of the world's remaining uncontacted tribes.

We would like to encourage you to leave a message for Emmanuel below.  When you do, it will notify Emmanuel and be an encouragement to him.  God bless you!