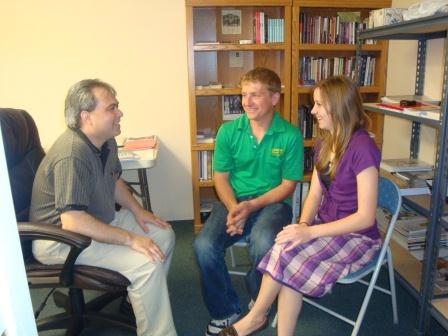 How easy is it for an English girl to date a former Amish boy?

When I was younger I was probably just like any other person that wasn’t around Amish people that much. If I’d see one out or happen to see a buggy I’d think it was really something. I look back and remember how my friends and I would be at flea markets and see the Amish boys. We would be too shy to talk to them, but the culture interested us. I met Monroe through one of his friends who had left the Amish. I was immediately attracted to him. I think the accent he has is so cute. Sometimes he speaks Pennsylvania Dutch to me and I never understand what he says, but I love it! I was so interested in everything about his past and he really never minded talking about it. I had met some of his friends that really didn’t even want people to know they used to be Amish. I can see why because people are so interested in this hidden society and once they find out, that’s all they want former Amish to talk about. Monroe was so open about his past though.

At first I thought the same thing most people do about the Amish, that they are very godly people with great morals and values. This is somewhat true, but there is so much more to it than people realize. So many things are so deeply installed in their minds and in that lifestyle. They are not really allowed to question why. Rules just must be obeyed. Almost everything in the Amish culture is forced and you’re not supposed to question it, that’s just how it works and you must follow! Soon after we started attending church, we both got saved. It was really something because getting saved is not something most Amish people normally believe in.

They live the Amish life, go to church, do what they are told and follow the rules. Then around age 17 they start the instruction classes to get baptized and make vows to the church. Even if this isn’t something they want to do, most are forced from the fear of what will happen if they don’t.

Some may have a close relationship with Jesus and God but I would say some expect to be blessed for making the sacrifices of living the Amish life or just simply following the rules because that’s what they were taught. I was shocked to find out that most Amish don’t think you can know if you are going to heaven. Most think that it is something you should never know or assume. God will decide that when your time comes. My personal belief is that some Amish probably don’t have as strong of faith in what Jesus Christ did for all of us and don’t realize how he gave us the faith in him and set us free from certain rules or laws. I really agree with a comment I heard Joe refer to. He said if the Bible was taken away from the Amish, but they were left with the ordinance letters they would still precede. On the other hand, if the Bible was left and the ordinance letters were taken away, they would be lost.

I always realized their clothing was different of course, but I never knew there were such differences among communities. I just assumed if you were Amish you all followed the same rules, but from my understanding the Bishop and ministers of each church decides what rules the people in that church or community will follow. I had purchased a book on Amish people and as we went through each page with the different pictures, Monroe would say they must be from a more liberal or less liberal community because of their dress. For example, the way they wear their suspender straps or don’t have to have their straw hats homemade or their head coverings are smaller or larger with so many exact wrinkles. Those are things I don’t think I ever would have noticed.The main thing is they want every person in that church or community to look as much alike as they can. Rules for each community restrict colors worn, the way suspenders must be, the length of dresses and specifications on the women’s head covering and so forth.

I had never really been around the culture that much and I never realized most of them only take baths on Saturday nights. That was crazy to me, but that’s one thing Monroe had no trouble changing from the time he had left. He had the opportunity to be around quite a few English people before he had left so I assume it was a little easier for him to make the change into living an English lifestyle. When I had met Monroe he had been gone from the Amish for about a year and two months. As soon as we started dating we just really hit it off. There have been a few things he has asked me about over time like phases and such. I thought it was so odd how he didn’t know a lot of the songs I grew up listening too, but it makes sense as he wasn’t ever allowed to listen to the radio or cds. He really noticed a difference in the English wedding ceremonies and the reception compared to the Amish. I remember him telling me about how shocked he was when the groom took off the bride’s garter at the reception.

I never asked him if he ever thought of going back to rejoin the Amish, but he always assured me he never wanted to go back because that was not the life for him. Then one night he dropped a bombshell. He had been considering going back. At first I was furious. How could he do this? Why would he be willing to throw what we have away for a lifestyle I know he doesn’t want? As time went on though I came to realize the confusion he was going through and how his family wanted him to believe that if he was not Amish there was no hope for him. It probably wasn’t even that they wanted him to believe this, but they truly believe it because that’s what they were taught. After months of Monroe being confused, I questioned who I was to say he shouldn’t go back. I felt like I knew in my heart that if he did go back he would regret it later, but maybe not. He was so confused. He would go to see his family and they would tell him something, then he would come back and I would tell him something different. I told him to read the Bible, but I felt because of how he was raised he would read it and just return back to his former teaching, instead of really studying it and trying to gain his own meaning and understanding.

As time went on we prayed along with friends and family about what he and those involved were going through. Over a period of time I believe I was led to the book of Galatians in order to point it out to Monroe. Twice I was led to verses in odd ways. Then finally when I was led back for the third time and read the whole book, I thought, “Wow” I have to tell Monroe to read this! I feel so strongly that God kept leading me there! Praise God!

After hearing a few people mention MAP and looking at their website a few times I decided to call them. Soon after I received information in the mail from them, I took one look at it and called Monroe to go over it with me. It faced a lot of concerns and doubts he had head on, through booklets and audio videos. We both truly believe MAP is an answer to our prayers. They are a great organization! Thank God he led us to them. We are so thankful! I feel like I have definitely realized a lot about the Amish I never knew before. I’m sure there is a lot I still don’t know. I can truly say through this experience Monroe and I have grown so much closer to the Lord, it really made us dig into the Bible and come across certain things we may have not focused on as much and realize the strength in faith. Through some of the worst situations we can all receive blessings, just keep your eyes and ears open as Joe has said. Thank you MAP!

We would like to encourage you to leave a message for Tiffany below.  When you do, it will notify Tiffany and be an encouragement to her.  God bless you!