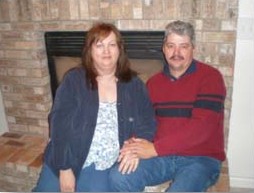 Hi I am so blessed to have come across your web site. I am Menno M Yoder and my wife is Ruth A Keim. We were originally from Ohio and western PA, but left the Amish in 1990 and went thru the same things that you guys did. When I was growing up, I never agreed with the Amish rules and for the most part didn't obey them either. When I was 29, my wife and I left the Amish for a short period of time and had a lot of problems dealing with life in general.

Then we ended up back in the Amish and then I got myself regrouped and challenged their rules and I announced to them that I was leaving their religion. This caused them to come and talk to me, which is what I wanted to happen. So, one evening 5 preachers came to talk to us, but I did most of the talking. I started by asking questions such as, why is it that my in-laws can have bathrooms where they live, and we say it is wrong where we live, yet we all proclaim to serve the same God. The other question I asked: I wanted them to show me in the Bible where God gave a man the authority to make his own rules and require people to follow them.

The other thing I asked: to show me where Jesus requested anyone to change their dress code before he would accept them because that's what you do when someone wants to become Amish; we talked until 1:00 am and the last thing they told me, quit reading the Bible.

Then we moved to Wright City MO, 50 miles west of St. Louis, and we have lived here ever since. And in the mess of all this, I was also trying to figure out who or what was right, and one day I told my wife that I believed God is going to forgive everyone in the world. And for the next 10 years, I lived a very sinful life. It got so bad I filed for a divorce and got addicted to drugs for 3 years.

Then one day I moved out, away from my wife and family for about 6 month. It got so bad that I got fired from my job, so I took all my belongings, put them in my car and headed out of town. I didn't want anyone to see me anymore, but I decided to stop at a friend's house to say goodbye for the last time. But she started to talk to me about God, once again.

This wasn't the first time she talked to me about God, and I began to think about my life, and I finally went on my knees and asked Jesus to show me what went wrong. I told Jesus that life wasn't supposed to be like this, and Jesus began to show me what was going on in my life. He gave me visions of the past and I finally began to understand things; this started around 11:00 pm. I began to experience spiritual things that lasted most of the night and at one point in time, I heard God's voice as clear as a bell -- Menno I love you.

The next morning I went back to my wife and got the Bible and tried to show her what I found, and she was very forgiving and took me back. But I didn't know what had happened to me. Neither one of the churches where we had attended, taught us to give our life to Jesus. This happened on a Friday night, and on the following Sunday, we went to a Nazarene church for a Bible study and during the study I asked for my wife and I to be excused. We went outside in my car and I prayed to God to somehow assure me that I was at the right church this time; He did just that.

That was in October of 2003; we still go there. Since then, I have taught children's classes and got voted on the church board and have my Minister's license.

There was a lot that happened that night and I took it all in; I guess I was ripe. It sure is a burden lifted to attend a church that teaches Bible truth and helps people find Jesus.

I forgot to say, after attending the church that Sunday, I learned what had happened to me. I was so glad to read your web page because I didn't know of any other Amish that left and gave their life to Jesus.

My wife and I are planning a trip to OH. Her parents live in Danville OH, which we haven't seen in 19 years. Sometime this spring we are going to visit them, and I would like to meet you all and your church.

This Testimony has been published with permission from the owner.