Two Men: One Religious, One Humble

During one of Jesus’ sermons here on earth, He began to tell a parable. In His story, He was specifically targeting a group of people who trusted in themselves that they were righteous, and despised others (Luke 18:9).

His parable began by introducing two men who entered the temple to pray. Both of these men seemed to be good. The prayers of the two men, however, were very different.

The Pharisee prayed and thanked God that he was not like other people; he named some specific people groups, including the man who was standing beside him. The Pharisee also went on to name two things that he did regularly: fast and give tithes.

Now, it is important to note that what this man did was certainly not wrong. He was praying for good things and was thankful that he was not unjust, an adulterer, or an extortioner, all of which are sins that should not be named among the people of God. In fact, in most churches, the Pharisee would be welcomed with open arms, especially for his giving, which may even be lifted up as a good example. 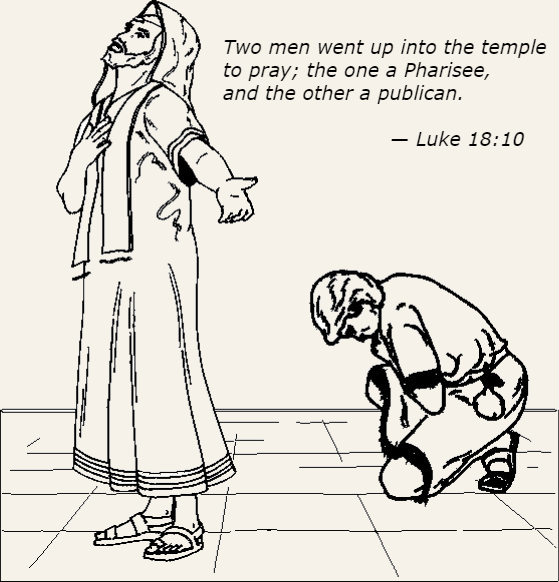 The poor chap praying beside him, on the other hand, seemingly had nothing. All this man did was pound his chest and ask for mercy from the Lord. He also admitted that he was a sinner.

As Jesus concluded His parable, He made this statement: this man went down to his house justified rather than the other (Luke 18:14). The seemingly good fellow was rejected, and the poor, insignificant one was lifted up. This seemed strange indeed!

Why did Jesus commend the poor man? It was all a matter of the heart. God cares very little about our goodness if we simply do it to gain righteousness. Instead, God wants brokenness and humility. It is in this kind of person that God can place His righteousness. God can use a broken and humble person in a mighty way.

Jesus finished up His sermon that day by stating that the proud shall be humbled, and the humbled shall be honored. I have observed men who have great talents and speaking abilities, but, may have never been called by God to be teachers and preachers. These individuals are just like the Pharisee, and because of their pride, God cannot use them.

Brokenness and humility are the keys that unlock the gifts that God wants to manifest in us. God will always resist the proud, and He will always give grace to the humble. We are all sinners, and we are all like the poor Publican. All we need to do is come before God and beg, “Be merciful. I am a sinner.”

We need to admit that goodness doesn’t cut it. Instead, we need God’s goodness. We cannot make ourselves holy; we need His holiness. A broken and contrite heart God will not despise. Rather, He will accept a heart like that.

Finally, God will justify. Do you know what justify means? Just-as-if-I had never sinned. What a great, loving, and merciful God we serve! He does not give us what we deserve. Instead, He bestows mercy upon us and gives us the righteousness for which His Son paid an unbelievable price. God does all of this because He loves us. That is the grace of God. Thank you, Jesus!