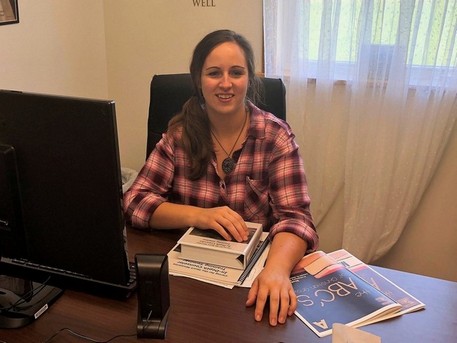 I was born and raised in the countryside of LaGrange, Indiana. For the first twenty years of my life, I lived with my parents in an Amish community. My home situation was not the most ideal, and I struggled with life for a good portion of my growing up years. I quickly learned that I had to fight for myself in order to survive; and all though I was a pretty “good” kid, my heart and soul was anything but good. I hated life, myself, my parents, and especially God. Depression and darkness were some my closest friends.

Even though I hated God, I somehow always knew that there had to be more to Him than rules. I searched for truth for several years during my mid to late teens, but I never dreamt that my search would lead me to where it did.

One morning in April of 2014, I was sitting in my counselor’s office, and we started praying. We prayed about all the things in my heart:  the pain, the hurt, the anger, the bitterness, the sins of others against me, my own sins, and most importantly, for my salvation. That day, when I walked away from the office, I was a new person. I knew I had met really Jesus for the first time in my life, and it was beautiful.

Even though I was now a new person, I did not think that leaving the Amish was an option. I did not necessarily like being Amish because of all the rules and inconsistencies, but I figured it was just the thing to do. I realized what would happen if I left, and I knew it would not be very pretty at all.

At the time all this was going on, I was working as a caretaker for a lady in Sturgis, Michigan. She was a wonderful Christian, and all though she was physically helpless, her spiritual life was strong. During the two years I took care of her, she examplified Christ over and over. Her pastor would also come to visit every week or two and was a big influence in my life. I had many conversations with him during those times, and I eventually began to see that there was so much more to life than following rules as a means to get to heaven. Being Amish did not save me, and it never could.

About four and a half months after I got saved, I left the Amish and moved in with my pastor’s sister and her husband. It was a struggle to experience the shunning as well as readjusting to a new life. However, my new family, my pastor and his wife, and my church family all stood behind me to offer support and encouragement.

When I left, I knew that I wanted to further my education, so I started working on my GED right away. I also began to sense a call to attend a small Bible college in Kentucky, and a year later, I started classes. It was during my first year at college that God began reaffirming a call He had placed on my life shortly after I got saved. I began to sense a desire to help young women find freedom and rest in Jesus Christ. The second month at college, God spoke to my heart using Acts 26:17-18. I did not appreciate it very much at that time because I thought He wanted me to go back Amish, so I pushed those verses as far back in my mind as possible.

In early 2018, I became connected with MAP through watching a video (now in DVD) series called “Breaking the Silence.” My mentor suggested that I connect with someone from that series, and Joe happened to be the one that I got in contact with. At that time, God brought Acts 26:17-18 back to me, and this time I was ready to listen.

Joe and I kept in contact over the next few months, and I came to see the ministry in June. God kept reaffirming that this was His will for me at this time in my life, so an interview was done in early August. I was accepted to work with the young women, and in early September, I moved to the New Beginning apartments.

In the short time that I have been at New Beginnings, there have been challenges but also rewards. Not all the girls that have come have stayed. I have seen bad choices being made, but I have also seen good choices and progress. At the time of this writing, there are three girls, a baby, and an intern occupying the other apartments. Please pray for the girls, their salvation, their Christian growth, and for me as I work with them.

We would like to encourage you to leave a message for Velda below.  When you do, it will notify Velda and be an encouragement to her.  God bless you!